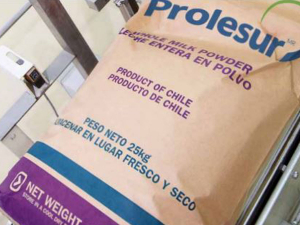 The purchase takes Fonterra's stake in Prolesur to 99.9%.

The 13.6% stake bought from Fundación Isabel Aninat takes the co-op’s stake in Prolesur to 99.9%.

Prolesur, based in southern Chile which sells most of its production to Soprole, a leading consumer branded dairy company in Chile and is 99.9% owned by Fonterra.

The remaining 0.1% of Prolesur’s shares are held by minority shareholders, which Fonterra will offer to purchase at the same price per share being paid to the Fundación for its shareholding.

Both Prolesur and Soprole have faced challenging trading conditions in recent years.

“Having the two more closely integrated will generate operating efficiencies across the supply chain from milk collection, to processing and administration,” says Wickham.

“It also allows us greater flexibility as we focus on realising the best value for the co-op from our businesses in Chile in line with our new strategy.”

It is looking at streamlining overseas milk pools; China, Chile and Australia.