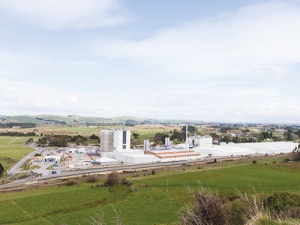 Fonterra’s Pahiatua plant is one site where the co-op spent money on boosting capacity.

Fonterra's return on capital sits at the bottom end of the range of returns of other global dairy co-ops, says the Shareholders Council.

The council says its analyses ROCE for other international dairy co-ops and companies when reviewing Fonterra's performance.

Although direct like-for-like comparisons are not available due to the mismatch of reporting periods, the council's review found Fonterra's ROCE under-achieves compared to international dairy co-ops such as Friesland Campina and Arla, which achieved ROCE of 10.4% and 7.9%.

For the 2015 financial report Fonterra adopted a new methodology for reporting on the ROCE of the group and its business units, the council says. The co-op excludes assets that it does not control, for example the $756 million investment to buy 18.8% of Chinese dairy company Beingmate, intangible assets and goodwill.

The co-op justifies this by saying these intangible assets often relate to decisions made by past management teams, the council says.

"The council has discussed this methodology and understands the rationale from the management's perspective, but... farmers regard the standard methodology – including the performance of all capital employed (including equity investments, goodwill and intangible assets) – as the more relevant performance measure.

"The council, on behalf of farmer shareholders is interested in the total capital invested by the co-op irrespective of whether it was spent on stainless steel or a brand."

The council's annual review also touched on Fonterra's balance sheet and its debt gearing ratio which jumped from 42.3% to 49.7%.

The co-op recorded a higher net interest-bearing debt of $7.2 billion last financial year, including higher advance payments to farmers of about $900 million.

The council says Fonterra management says this will reverse this season and, with retentions from forecast earnings, will lead to a lower gearing ratio for 2016.

The higher advanced payment rate is shown by the amount Fonterra owed farmers at the end of July 2015 – about $0.07/kgMS vs $1.10/kgMS at the same time last year.

The council says the higher debt levels are due in part to lower retained earnings.

The number of Fonterra employees each paid over $1 million annually was up 29% to 22 in the 2015 financial year.

The Fonterra Shareholders Council annual report says the employee numbers rose 21% to 22,000, up from 18,200 in 2014. The increase mostly reflects the effect of the co-op's Latin American business, Dairy Partners Americas (DPA), consolidation, the council says.