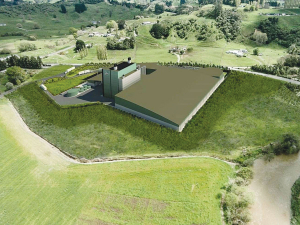 Happy Valley Milk says work on the new plant should start in September.

Waikato should have a new $280 million milk plant up and running by August 2021.

“Construction of the plant is anticipated to take 12 months then commissioning a further six months. Production will then commence, currently targeted for August 2021.”

The company is working closely with Otorohanga District Council and the community on the project.

“We’re grateful to all who have been involved and contributed throughout the process to date and look forward to continuing to work with all stakeholders,” he says.

The project will be a financial boost for the district. Reports have indicated the initial construction phase will provide the region with a one-off impact of $29 million, the equivalent of 330 full time jobs.

The resource consent process has taken longer than expected due to initial concerns by Otorohanga District Council on the environmental impact of the project.

Van der Burgh says it was a robust process and the company is happy with the outcome.

“It is obviously a very significant milestone for us as a company and as a member of the Otorohanga community. It’s the culmination of a lot of hard work by a number of people who saw the potential of the district and shared a vision to provide pathways for it to prosper.”

Once construction has begun, Happy Valley Milk will finalise contracts with about 80 farmer suppliers in King Country/Waikato, depending on herd size.

Randolp van der Burgh says this is no more than 2% of the milk supply in the region.

“We will select our farmer suppliers based on strict criteria underpinned by our... four sustainability pillars: environment (effluent, waterways, water use, nutrient management and land use), animal health and welfare, milk quality, and social responsibility.”

But he worries that Fonterra continues to bleed suppliers to rival processors.

“If the milk supply reaches a tipping point so that Fonterra is left with uneconomic stranded assets, they may become uncompetitive in setting the milk price, resulting in a lower milk price that will impact all dairy farmers as the corporate processors all base their milk price on Fonterra’s.

“However I hope this will mean Fonterra continues to rise up and meet the challenge, fight to keep its suppliers and [so] ensure that all farmers continue to get a competitive milk price.”