Hanging out for GM forage 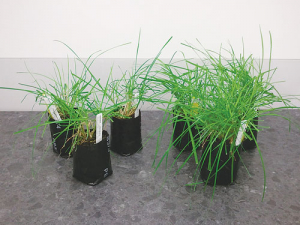 Field trials on AgResearch’s new genetically modified forage are being carried out in the US.

Farmers hearing about the potentially huge benefits of genetically modified forage being developed by AgResearch are incredulous that it could be years -- if ever – before they can get their hands on it.

AgResearch principal scientist Greg Bryan summarised the development at a workshop at the recent DairyNZ Farmers’ Forum at Lincoln University’s Ashley Dene research farm. His group is developing ‘high metabolisable energy’ (HME) forages based on increasing foliar lipids – fat content in the leaves – of ryegrass and other species.

The work in New Zealand has been in the lab and containment glasshouses. But NZ’s GM rules prevent the next stage, field trials, being done here.

Bryan said he was just back from the US where plants grown in pots were about to be transplanted into fields.

He explained that the research began on increasing lipids in ryegrass. Initially they produced plants which synthesised extra oil but then metabolised it away. They then looked at how plants successfully stored oil in seeds by surrounding lipid bodies in a protective protein. Incorporating that protein produced plants able to accumulate oil bodies in the leaves.

“And as we did that work we were surprised to find the plants actually grew faster,” said Bryan. “I don’t just mean a little faster, I mean 50% faster. It was pretty amazing.”

Accumulating lipids in the leaves increased the photosynthesis, he said.

“We’ve got plants in our containment glasshouses that are three-four years old, and we cut them back every three weeks and they regrow a bit faster every time.”

This shows the method is stable and will work in “pretty much any” plant species using a ‘C3’ photosynthesis type, which includes many common crops.

Bryan hopes the work will lead to an informed debate in this country but he warned it may be a minimum eight years “to get it to you guys”.

“Why is it taking eight years?” asked a workshop attendee. “This is ridiculous. It can’t be tested here in NZ and it may never even be able to be used in NZ,” remarked another.

Asked whether the Americans could “get hold of it in the meantime,” Bryan said they may not get hold of this specific technology but there are competing technologies that could achieve the same thing, already in development overseas. If NZ does nothing we will fall behind, he said.

Bryan presented figures suggesting potentially increased farm revenues of $900/ha, a reduction in the total urinary nitrogen load on pasture of 6-7% and a 15-23% reduction in methane emissions.

The plants also had a measured 9% increase in water use efficiency, which should improve responses to drought. Even farmers on non-irrigated land could potentially enjoy a more reliable feed supply and reduced reliance on bought-in feed.

Although HME forages had yet to be fed to animals and the higher ME has so far only been assessed by calorimeters in the lab, it is expected to lead to improved liveweight gains and milk solid production.

Bryan said the methane reductions of 15-23% had also come from in-vitro measurement and had yet to be confirmed in the field, but fats are known to be toxic to methanogens in the rumen.

“What we want to do in the field trial is verify a whole lot of things including the growth rate,” said Bryan.

The enzyme producing the increased lipids had come from nasturtium and the protein that protected the fat bodies in the leaf was from sesame.