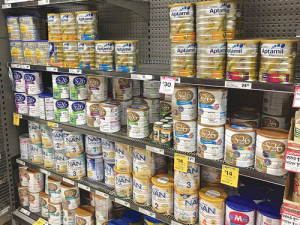 The Code of Practice for Marketing of Infant Formula in New Zealand restricts the advertising and marketing of infant formula products for children up to 12 months of age.

It was revised after INC applied to the Commerce Commission to extend the restriction that applied to products for children up to six months old.

The INC represents most infant formula.

Carey says they sought the restriction because they believed the improved health outcomes that would flow from it would outweigh the detriments arising from the lessening of competition between formula makers.

“We recognised the importance of aligning the marketing practices of infant formula that is the sole source of nutrition for infants up to six months with breast milk substitutes for infants up to the age of 12 months.

“The commission agreed, and their decision underlined exactly what the industry is trying to do – put the health of babies and mothers first.

“The industry has acted, in my view, with great responsibility and integrity by revising the code.

“Our stance is supported by many public health bodies. It aligns with recent guidance from the World Health Assembly and is consistent with the Ministry of Health’s nutrition guidelines for infants.”

The revised code was launched at Parliament on April 30 by Health Minister David Clark and Minister for Food Safety Damien O’Connor.