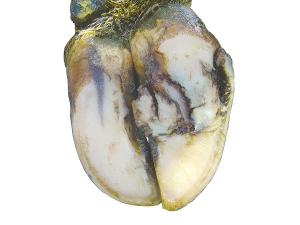 Lameness can have a big impact on animal welfare and milk production.

This is because of variations in how farmers count lameness, says veterinary technical manager Ash Keown.

The Farm Insights Report is an assessment given to Fonterra-supplying farms each year, covering food safety, animal health and welfare, and environmental topics such as effluent management and stock exclusion.

The reports were sent out to farmers in September.

Speaking at the Smaller Milk and Supply Herds (SMASH) online seminar recently, Keown said the co-operative relied on farmer shareholders for information on their farms.

“This is really valuable to the co-op, and we need that to do what we do, but this is really an opportunity to reflect that back to you as farmers,” Keown says.

He says lameness can have a big impact on animal welfare and milk production.

“This can be a really impactful disease, both in terms of animal wellbeing but also, cows that are lame or have reduced mobility tend not to eat as much, they’re not going to be as productive in terms of milk, they’re not as fertile, so it’s got all these other downstream effects.”

However, Keown said the reason they were unable to benchmark lameness is because of the differences in how different farmers record it.

“The challenge that we’ve got here is just in the way that farmers are recording and reporting this data,” Keown said, adding that there were differences in how farmers approached it.

“So, some farmers might be recording and reporting every single cow… even a grade 1 lameness and all they might have done is identified her and then they’ve given her a rest for a couple of days and she’s been fine and they record that down as a lame animal.

“Whereas we’ve got other farmers that are only sort of reporting the animals that they draft out and treat, for example, so maybe they’ve treated them with veterinary medicines and those are the ones that they report.”

He says this spread of results makes it difficult to benchmark lameness within the Farm Insights Report.

He says that instead of benchmarking, and telling farmers they sit somewhere the co-operative isn’t certain they are at, the report is warning farmers that every lame animal they have has a cost attached to it.

“So, really, this page [in the report] is just about saying, ‘Hey if you hadn’t thought about lameness before, there’s a significant dollar value attributed to this’, and we’ve really focused in on things that contribute to lameness rather than necessarily the number itself.”