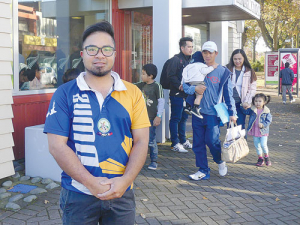 For a few days in May, Ashburton’s i-site information centre could have been mistaken for a small corner of Manila as the Philippines Embassy took it over for one of its regular mobile consular visits.

Young single men and whole family groups gathered around the office as Filipinos from around the district and further afield arrived to register new births, renew passports, etc.

The Ashburton district has a high population of Filipinos, especially dairy workers and their families, and is home to the Filipino Dairy Workers in New Zealand (FDWNZ) group.

FDWNZ chairman Earl Magtibay says the Philippines mobile consulate first came to Ashburton in 2011, at the group’s suggestion, and now regularly travels the country. Previously, he says, families faced an expensive trip to the embassy in Wellington.

Immigration problems prompted the formal set-up of the group in 2007. Magtibay says its members now number 300 families, mostly dairy workers, but it tries to cater to all Filipinos.

The non-profit group advocates for the dairy workers and aims to help Filipinos to integrate in the community, running seminars and workshops on vocational and life skills such as first aid, food handling and driver training. It runs an annual basketball league from February to April and Christmas and halloween parties.

Coinciding with the consulate visit was a well-attended cultural festival which Magtibay says could become an annual event.

The group also has a Facebook page which serves, among other things, as a job exchange helping Filipino workers find employment.

“We have been doing a good job with the integration part. The main problem is the immigration challenges,” says Magtibay.

“Dairy farming is stressful enough [without]immigration issues [caused] by employment challenges such as exploitation and discrimination, and abuse sometimes. So that’s what we are working for.

“Because there are lots of advantages in working on dairy farms. There are employers who are supportive and good and we don’t want their efforts to be in vain.”

The immigration status of many Filipino dairy workers has been uncertain after they were found to be here on false papers, when an immigration scam was uncovered in 2015.

After lobbying from the FDWNZ they were eventually given amnesty, and even those on false papers became eligible for a South Island Contribution Work Visa.

Applications for that have recently closed but Magtibay says it was “really good” for the community.

“When it came out [we felt] it had been a long time coming.”

Earl Magtibay has been in New Zealand about 10 years. He qualified as a veterinarian in the Philippines but grins, saying “I don’t think it’s my calling any more”.

He finds it more rewarding to solve people’s problems in his role with the FDWNZ.

His day job is assistant farm manager on a two-shed dairy farm near Rakaia where he is responsible for a herd of 450.

“I’ve got really good bosses, because I’ve been there six years already.”

The group has been recognised for its work, being named the 2017 regional supreme winner of the Trustpower Community Awards, although it was unplaced in the recent national final.