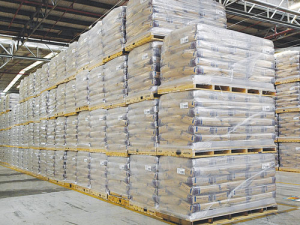 A big reduction in European stocks of skim milk powder (SMP) was behind its whopping 10.3% rise in price at last week’s auction, economists concur.

Westpac’s Anne Boniface says the EU Commission has all but removed SMP stocks sitting in warehouses – at least on paper. Buyers are looking to procure SMP while prices are still affordable.

BNZ’s Doug Steel says New Zealand may be having a very strong milk season “but make no mistake, Europe is in the driving seat of international dairy prices at the moment”.

ANZ’s Susan Kilsby says stocks in Europe have overhung the market for a couple of years but they are now moving through the market quickly – a positive sign the market is absorbing more product than is currently being produced. That is adding to the positive sentiment in the market.

ASB’s Nathan Penny says EU has come to the aid of the dairy party.

“And it’s about time too! Over the last few years, the spectre of large EU intervention stocks has cast a shadow over SMP prices.

“Global dairy prices have also been impacted more generally, albeit to a lesser degree.

“Now though, the EU has sold down a significant portion of these stocks, which looks to be enough to convince the dairy market to release the shackles on skim milk prices.”

Kilsby says another factor in last week’s GDT results is that China demand has moved back up to levels of a year ago but the economic signals coming out of China are not as positive.

“There are a lot of negative economic indicators in that market. But we are reasonably confident in the short term that this won’t flow through to demand for dairy products…. There will be a bit of resilience there.”

China’s own dairy farmers are facing higher costs as a consequence of the US-China trade war.

“They import a lot of feed from the US…. those costs have risen as a result of those higher tariffs. It is costing more to produce milk in China and creating a greater incentive to import dairy product which is cheaper.”

Boniface says North Asia buyers dominated by China gobbled up at least 60% of the product on offer this month – well above average levels for this time of year.

Rising milk production in the Americas and Europe, the COVID-19 pandemic and a strong NZ dollar are making it difficult for economists to forecast the 2020-21 milk price.