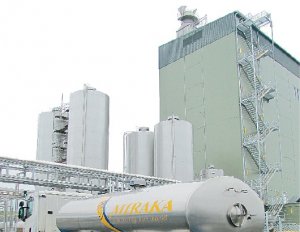 Miraka, the Maori owned dairy processing plant near Taupo, will be operating at full capacity this season and it’s been having a major spring clean to gear up for change.

Chief executive Richard Wyeth says they plan to produce 35,000 tonnes of whole milk powder (WMP) this season - well up on the 25,000 tonnes produced in the past season, which was its first.

The plant started processing on Monday having closed for nearly two months for scheduled maintenance.

“The team here has been through winter maintenance and is pretty excited about starting up the second term,” Wyeth says. “It’s just been a matter of making sure all the evaporators are stripped down and the whole plant given a thorough clean. We’ve been using abseilers to clean the insides of the powder bins as well as other parts of the plant.”

Wyeth says while the plant uses some very advanced technology, this is robust and does not require much maintenance.

“It’s essentially the mechanical side that we have been attending to,” he says.

Miraka has a full book of suppliers and this means the new factory will be operating at full capacity – a year ahead of schedule.

“Last year we stretched the legs on the plant so we ran it at full capacity for a number of days in October to make sure the plant could cope with producing 35,000 tonnes of WMP. I am comfortable that we’ll be able to do that but it will come with a bit more pressure than our first season,” he says.

Most of the extra production will be taken by existing customers. Wyeth says the customers liked what the plant produced and want more, so there won’t be a significant increase in the customer base in 2012-13.

But the success of the past season has put the focus on future growth to which he will devote a significant amount of his time this year.

“We are certainly keen to grow.”