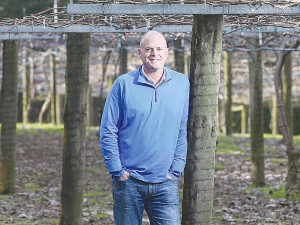 Muller last week took over from Nathan Guy, who will retire from politics at the general election next year.

The Bay of Plenty MP says if he sees the Government doing something against the interests of agribusiness he will speak out.

“I will be a fierce advocate for the agribusiness sector.”

Muller, a former executive at Zespri and Fonterra, says it’s a huge privilege to be the agriculture spokesman for National.

“I’m very excited about the opportunity to contribute to National and to be a voice for the agribusiness sector.”

Muller says discussions on the primary sector mostly concern its contribution to the national economy -- a whopping $45 billion annually.

But other stories also need to be told, about farmers doing good work to be more environmentally efficient relative to other countries.

Opposition Leader Simon Bridges announced that Muller will pick up the agriculture, biosecurity and food safety portfolios. He already has forestry.

“Todd is a hard working and high performing MP who deserves promotion. I have no doubt that Todd will hold this Government to account on behalf of rural New Zealand,” he said.

“Nathan has been a valued colleague and friend. I wish him all the best for his future career and thank him for the service he has given NZ over 15 years.

“Nathan has been a champion for rural NZ. As a farmer and a businessman he understood more than most what the sector needed and he delivered for them.”

Muller’s climate change portfolio has been picked up by Scott Simpson.

Meanwhile IrrigationNZ congratulated Muller on his new role and thanked Nathan Guy for his contribution to the primary sector.

“IrrigationNZ looks forward to continuing to work with all political parties to help develop pragmatic, fair and future focused freshwater and irrigation policy to ensure all NZers benefit from this precious resource,” said Elizabeth Soal, chief executive of IrrigationNZ.

Federated Farmers acknowledges Nathan Guy’s contribution to the primary sector, describing him as a pragmatic and knowledgeable minister.

President Katie Milne says his door was always open and he was always level headed and considered in his dealings with people.

“He had his finger firmly on the rural pulse and I always appreciated that you could have free and frank discussions with him, occasionally by phone when he was out helping weigh and drench calves. He has real empathy for the sector and for the wellbeing of rural communities.”

Milne says when the Land & Water Forum was advocating for what farmers considered overly ambitious rules on stock exclusion, Guy stood firm and was realistic about what would work in practice.

Biosecurity was one of his priorities and he began beefing up border security, a task the current government has continued, Milne says.

Tony Kuriger, the son of National’s Taranaki-King Country MP Barbara Kuriger has pleaded guilty to eleven charges of ill-treating cows in a dairy herd he was responsible for.

New Zealand needs to start looking at the water issue much more strategically, according to National’s spokesperson on agriculture Todd Muller.

Nats cop it too

Interestingly, none of the politicians managed to escape the wrath of farmers at the protest march organised by the lobby 50 Shades of Green.