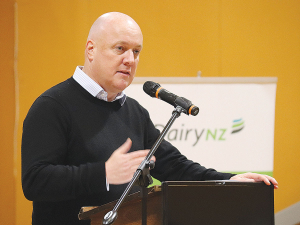 Chris Luxon told Waikato farmers that National is back and is serious about its commitment to the agricultural sector.

Christopher Luxon's comments came in the small Manawatū township of Rongotea at a dairy farmers' forum organised by DairyNZ.

About 100 people turned up for the event which was also used as a networking event. Luxon had earlier attended the Friday Feilding sale where he also met informally with farmers. His speech was not focused on specific farming issues so much as the lack of positive outcomes from government spending.

His time at the podium, to a largely sympathetic audience, was mainly spent trying to woo and assure the rural community that National always was, and still is, the farmers' party. It was unashamedly electionerring.

"We are back an dare serious about our commitment to the agricultural sector," he proclaimed.

Luxon then went on to say that NZ is an agricultural nation and this is something everyone should be proud of. He listed a series of statistics such as the fact that NZ feeds 40 million people, employs 350,000 people generates 80% of our exporter earning and for every man, woman and child generates $9,000 a year.

"That is a phenomenal record. We have seen tourists and education go backward post Covid; agriculture is more important to us than it's ever been and it should be celebrated."