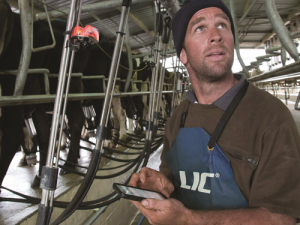 A new app for farmers has been launched by LIC Automation to help those with CellSense in-line sensors to more easily manage mastitis in their herd.

A new app for farmers has been launched by LIC Automation to help those with CellSense in-line sensors to more easily manage mastitis in their herd.

CellSense is an automated in-line sensor providing farmers with a live somatic cell count (SCC) result within two minutes of cupping the cow. The new CellSense Connected app sends the SCC results straight to farmers’ smart devices. Data is presented in an easy-to-use format on the farmers’ devices (phones and tablets), allowing them to assign a SCC result to a cow during milking.

This means farmers can view reports at their convenience and use them to aid dry off decisions. A flashing light system in the milking shed is an optional extra that alerts farmers to which cows in the herd have a high SCC.

The app has been designed for farmers who run smaller operations and are looking for a cost-effective way manage mastitis. LIC Automation have found through on-farm trials that farmers are mainly concerned with the cows that have a high SCC level and tend to record only the outliers in their herd.

CellSense Connected integrates to LIC Automation’s Protrack, allowing farmers to schedule drafts from the app. It is suitable for both Herringbone and Rotary sheds and connects to other LIC Automation products.