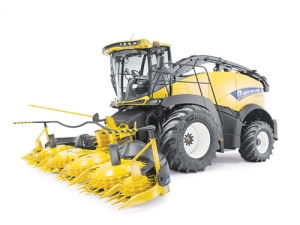 New Holland’s new range of FR self-propelled harvesters are due for release late this year.

With the end of 2016 in sight, New Holland has released details of the FR range of self-propelled foragers.

With a combination of Ad-Blue / DEF and DOC to deal with emissions, the 2016 set-up is said to use around 13% less fuel than the previous Tier 3 versions, but maintains the same length of cut.

As part of the 2016 upgrades, all models are now fitted with ECO mode which reduces fuel consumption when the engine cannot be fully loaded, with the engine management system controlling engine speed to suit the job at hand. There is also an option of the NH Powercruise system which monitors power use and can adapt forward speeds to achieve the highest work rate in variable conditions. The package is further enhanced by larger fuel and DEF tanks to enable longer intervals between refills.

At the front end of the machine, HN claims to have the largest feed channel in the industry, with a 750mm wide feed roll unit delivering to a chopping cylinder with a chevron knife layout. A choice of 2x8, 2x10 or 2x12 knives gives a range of chop lengths of 6-33mm, 5-27mm or 4-22mm respectively.

An added bonus is the NH Hydroloc system offering on-the-go adjustment of chop length as conditions dictate. This system can be combined with the optional NH Activeloc system which monitors information from moisture and yield sensors to adjust length of cut automatically, based on moisture content, with the ability to adjust by up to 5mm over a 5% moisture change.

At the delivery end of the machine, 2016 sees a new spout layout with full length, replaceable side and top liners, a hard faced flipper at the spout's end, and a larger flipper control ram. At the base of the spout, an improved lubrication system takes care of wear and tear, and the optional NH Intellifill will fill trucks or trailers automatically in all conditions

The operator is not forgotten either, with a new cabin offering 360 degree views, with an exceptional, uncluttered view of the header and spout areas. A deluxe air suspension seat offers auto weight adjustment, variable shock absorption and a host of adjustments to suit all shapes and sizes. An optional leather luxury seat can be specified in the 3 larger models.

To further enhance the package a slim double jointed steering column, and the CommandGrip control lever combine to offer fingertip control, and the Intelliview display screens monitors all machine functions.

The latest New Holland T8 GENESIS is said to capitalise on the productive combinations of Stage V horsepower and digital technology.