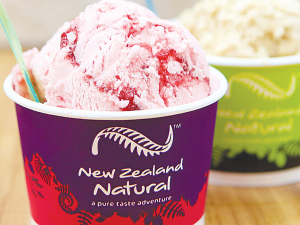 Ice Cream could be New Zealand's next big export.

New Zealand ice cream makers are somewhat in agreement with the Government’s assessment that there is room for expansion in the ice cream market.

Last month, Minister for Economic and Regional Development Stuart Nash released a report for the Food and Beverage Information Project which suggested there was scope to expand ice cream exports to Australia, Asia and the United Kingdom.

Marcus Moore of Much Moore Ice Cream says he is optimistic about New Zealand’s prospects in the export sector for ice cream.

“I believe this is because we have the ability to innovate and bring new consumer trends to market quickly; New Zealand food businesses are generally very nimble so can rapidly adapt to new food trends,” he says.

“New Zealand also has a fantastic dairy reputation that creates a strong platform on which to grow the attractiveness of our ice cream industry to overseas markets.”

“Our dairy industry has established itself as one of the finest in the world and that has to be very positive for ice cream producers,” Moore says.

Nash notes that ice cream is produced in almost every region in New Zealand and there are around 48 local manufacturers.

“The challenge is translating our strong global position in dairy exports into a lucrative global market for our ice cream and other frozen treats.”

The report claims the NZ ice cream exports are growing in value, but volumes have remained relatively flat at 10-12,000 tonnes per year for approximately 15 years.

The report notes that China and Japan take 72% (US$26 million) of New Zealand’s ice cream exports but New Zealand remains a minor player in the wider Asian region.

For comparison, approximately US$281 million of ice cream was sold in Asia by European producers in 2019.

Entrepreneur Diane Foreman, known to many as the ice cream lady, has fired a broadside at Fonterra saying “it needs a kick up the backside”.