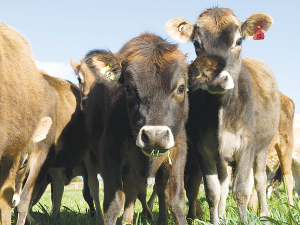 The 2022 forecast Farmgate Milk Price of $9.60 has been revised back to $9.30 and escalating costs over the past six months have brought profits down.

However, going through to the 2023 season (which has a mid-range forecast farmgate milk price of $9), dairy farmers are facing 12 months of high prices for fuel, feed, freight and fertiliser, not to mention rising interest rates and inflation - and no way of knowing how bad things might get.

"We haven't seen the full impact of these costs yet because expenses have only been increasing significantly over the past six months," she says.

Buerling says it's important that everyone who is affected gets to grip with their financial position, considering everything from their break-even milk prices to pasture and feed requirements.

From there, it's important to form a financial plan and establish goals for the year ahead.

"It's quite a volatile environment... so our approach to that is going to be, know your position and keep an eye on it, and then you can make timely decisions," she says.

"Now, when it's not as busy on the farm, is a prime time to be nailing down a forecast for the year. Instead of thinking at the end of the season, 'we haven't done very well', you can assess every couple of months and go, 'right we're not tracking where we want to be - what can we do?'"

Other farming sectors are facing the same cost increases, while those in the agricultural and horticultural industries are also dealing with labour shortages, she says.

"It's not necessarily just labour shortages, but the pressure to pay a really good wage to secure your people, or at least provide decent housing, otherwise you're generally expecting people to travel and they're not going to travel if the fuel costs too much."

If you're in agri-business, budgeting may not be a top priority - or maybe you track the business's performance in your head.

But Covid-19, the war in Ukraine, increased interest rates, rising inflation and other instabilities have made it doubly important to know your financial position and have an up-to-date forecast.

"For example, an increased interest rate of two percent might double your interest bill, and it's got the potential to unravel your business, so you've got to take pre-emptive steps to avoid that," says Burling.

There are software programmes that can provide an accurate and up-to-date view of farmers' current position.

"You create your forecast at the start of the year and as you update it every couple of months (in line with GST works well), the software overwrites your previous forecast with actual data, so you'll always have a current forecast closing position.

"The key thing is to use the winter season to keep of forecasting and build good habits for the future," she says.

Fonterra has announced its half-year results, with net profit down 7% to $364 million.