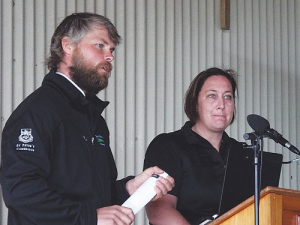 Located on the banks of the Waikato River, the 148ha farm had 1436mm rain over the 2016-17 season compared to 953mm in the previous year. Rainfall in July and particularly August also showed a marked increase over last year.

Farm manager Tom Buckley gave the visitors an overview of the stocking regime: 421 milking cows versus last year’s 430 because of a decision to drop maize silage from the mix after paddock feeding resulted in poor utilisation.

Lameness persisted, though infections appeared less severe than in previous years, and mastitis followed a similar path despite a robust dry-cow and teat-seal policy at drying-off.

Calving was a little behind this season, compared to 2015-16 season; production was well above expectations, the herd producing at least 2kgMS/day on a grass-based diet supplemented by PKE until August 20.

Grass cover measured in early June was below the target of 2500kgDM/ha, but by the end of the month it had caught up and went on to exceed that target during July and August.

Wet weather as far back as April delayed the autumn application of nitrogen, which in turn postponed the first spring application to early July when 80kg/ha was applied; this will continue at 25kg/ha N as the grazing rounds progress.

Operating expenses were $4.75/kgMS, leaving an operating profit of $1.63 and an operating margin of 25.6%. The financial position will allow the business to reduce debt; it plans to pay $150,000 of principal in six equal payments starting in December.

The farm also plans to improve milk cooling, always a problem there, with water arriving at the primary cooler at 17 - 19 degrees C, and tending to rise to 23 degrees C during high summer.

The farm water supply takes a convoluted route from the bore to the nearby Velodrome and on to St Peter’s School before it arrives at the farm; it can typically gain 7 degrees C on its journey. The need to improve the situation was clear, especially because the primary cooling circuit’s need to work overtime made energy consumption a key consideration.

After studying many available cooling systems the farm chose a variable-rate glycol based system that avoided an upgrade of the farm’s electrical transformer. The unit cost more than some but is calculated to roughly halve running costs and could save $4000 annually.