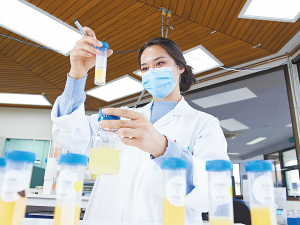 LIC is preparing to inseminate around 200,000 cows with fresh sexed semen this Spring, up from 110,00 the previous year.

The number of New Zealand dairy cows mated to sexed semen is set to double this year as farmers look to capitalise on the technology which delivers a 90% chance of producing a female calf.

LIC, the largest supplier of artificial breeding services in New Zealand, is preparing to inseminate around 200,000 cows with fresh sexed semen this spring, up from 110,000 the previous year.

Malcolm Ellis, LIC general manager NZ Markets, says the increased demand is driven by a deeper understanding and realisation among farmers that if they aren't going to be milking more cows in the future, they will need to be milking better cows.

Ellis says it's pleasing to see farmers applying additional focus on the offspring of their superious cows and avoid retaining female replacements from the tail-end cows - a critical aspect of the herd improvement equation.

"Farmers don't need to leave the gender of their calves to chance. By knowing sufficient replacements will be generated from their best cows, farmers are able to consider alternative beef AB options for their poorer performing animals, enabling them to significantly reduce the number of bobby calves leaving the farm."

"It was always disappointing to see some of our lovely crossbred bulls going on the bobby truck. Using sexed semen across our top-tier cows has allowed us to produce roughly 30 heifer calves that would have otherwise been bobbies. It's a win-win - we can retain more of our good geneti with less waste overall."

LIC has been supplying sexed semen to farmers for over a decade, but interest in the product has grown significantly in the past two years.

"Weith farmers proactively looking at ways to mitigate consumer, environmental and animal welfare concerns, sexed semen is a useful tool for them to have in their toolbox," Ellis said.

To meet demand, LIC has repurposed an area within their Hamilton headquarters to accommodate a new laboratory facility, says Ellis.

LIC is the only provider of fresh sexed semen in New Zealand, which delivers a noticeably better chance of getting a cow pregnant than the frozen alternative.

"Getting cows in-calf is one of the most important parts of any dairy farmer's seasonal focus, so it's critical we deliver a sexed semen product that doesn't notably compromise that goal."

"As we no longer need to transport semen offsite to be sex-sorted, we have significantly reduced the downtime between collection and the sorting process, enabling longer use in the field which ultimately gives more farmers in the opportunity to tap into its value," says Ellis.

LIC board pay rise knocked back

With mating season around the corner, there's no time for guesswork or getting herd nutrition wrong, according to GrainCorp Feeds' technical support manager Ken Winter.