Top brass to cut the ribbon 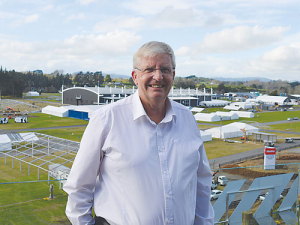 Over 1100 exhibitors are converging on Mystery Creek, Hamilton, for the four-day event, to be officially opened by NZ Fieldays Society patron and Governor-General Patsy Reddy.

Nation says the society is pleased the Governor-General accepted its invitation.

“She is our patron; considering she has a very small number of patronages it’s good to have her,” he told Dairy News.

“It’s also the first time in a very long time that the Governor-General is opening Fieldays.”

Despite the June 13-16 event coinciding with Parliament sitting, political leaders are expected in a steady stream.

Anticipating the 50th anniversary, the society two years ago set up a committee of past-presidents and life members.

Events held throughout this year have marked the anniversary and in November a book will be published with stories and photos from past Fieldays.

The book’s closing chapter will cover the 50th anniversary event.

A children’s book is also being compiled by a Cambridge writer, telling of a brother’s and sister’s experiences at Fieldays.

“The idea is a children’s book can go into education facilities and live on,” Nation said.

Highlights of this year’s event will include an array of international exhibitors including the Czech Republic taking part for the first time, and Ireland, South Korea, Australia, US, and UK.  China will be notably absent; a delegation attended last year.

The careers and education hub, launched two years ago, continues to attract interest; about 1000 students are pre-booked to attend Fieldays.

“Having all these students turn up in school buses is exciting for the industry; this is what we are about,” says Nation.

Go to the doctor

An expanded health-and-wellbeing hub will be found in the education centre and more exhibitors have registered.

“It’s about prostrate, cancers, heart health and other health issues. From what we know we saved 11 lives last year; they walked in and were told by our health professionals to visit the doctor on Monday because things were not looking good.

“We’re really proud of this, and we’re not just talking about farmers but urban dwellers who visited the event.”

The ticket price for the 2018 Fieldays will be higher.

Fieldays chief executive Peter Nation says the ticket price hike has been “fairly accepted so far and it’s still a cheap day out.”

Nation says even with support of sponsors the NZ Fieldays Society has to fund infrastructure development at the site, provide buses for transport and fund education and health centres during the event.

“We’re also losing income as we could be selling the sites to exhibitors but that’s not what we’re about.

“We are proud to see 1000 students pre-booked for our event; we’re giving them an opportunity and not many organisations do that.”