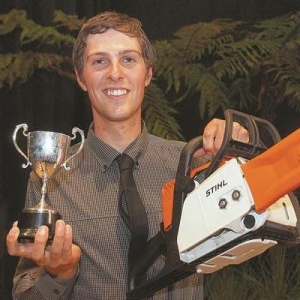 UNLIKE MANY 18-year-olds, Shawn Sands is a future farmer with a fair idea of where he's going and how he's getting there.

Sands grew up on his parents' 74ha dairy farm at Aka Aka near Waiuku, just south of Auckland, which peak milks 224 cows. But after training – he's going back for another year of study -- and before he decides whether to go back to the family farm, he's getting experience on someone else's farm.

"I aim to work my way into share milking and even farm ownership someday," he told Rural News.
Meanwhile, he is returning to Taratahi, near Masterton, next year for the Agriculture Dairy level four course, backed by DairyNZ and a Richard Mills Memorial scholarships he has just won in addition to the accolades he achieved at the end-of-year prize giving.

Despite living on a farm all his life, Sands says he learnt plenty especially on the theory side,
"It also gave me new ideas and I learnt things like how to fence properly, use a chainsaw safely and ride an ATV safely," he says.

"Coming from a farm it is still good idea to get qualifications and training. It all helps for getting jobs, putting on your CV, it helps going for a loan if you want a to buy a herd or something ... they like to see you've got the qualifications to back up what you're doing."

But he says the course is also great for city dwellers with an interest in agriculture. "For anyone who has never been on a farm, it goes through all the basics. There's quite a few people from Auckland or Wellington, some of them never set foot on a farm. By the end of the year you wouldn't know they hadn't had any experience before."

Sands says Taratahi is a great stepping stone for moving out of home rather than going straight into a job. "You meet a lot of different people down there, you get to network and make a lot of friends and socialise."
He puts his success this year down to attitude – being easy to train and showing a good work ethic. His parents and tutors played their parts.

Taratahi chief executive Donovan Wearing said at the graduation of 139 students at the Masterton Town Hall that the training centre has a 90% course completion rate and 85% qualification rate. "Outcomes for Maori learners are some of the best in the country and that makes me extremely proud," he said.

$64m gain from sale for Fonterra

Fonterra has pulled the plug on another investment overseas as the co-op continues to rebuild its balance sheet.