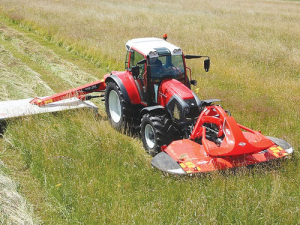 The acclaimed machinery maker Kuhn, known especially for its cultivation and grassland gear, is celebrating 190 years since Joseph Kuhn opened a forge in Alsace, France in 1828.

It’s a world away from the company that first made weigh scales then, with the opening of the Paris-Strasbourg train line, opened a new factory in Saverne where Joseph was joined by his brothers to begin making farm machinery.

By the start of the 20th century the factory was making several dozen machines each week despite the political uncertainties that saw the region become German in 1871, then French again in 1918.

WW2 saw a decade of growth end and financial insecurity compel the company to join with the Swiss Bucher-Guyer company for survival.

Over time it bought many farm machinery makers: the French plough maker Huard in 1987, and the mixer wagon and straw processing specialist Audureau in 1993. In 1996 it expanded its range with seed drills and sprayers when Nodet joined the business, and in 2002 it added the American mixer wagon and manure spreader maker Knight Manufacturing.

In 2005 the business bought the precision drill maker Metasa of Brazil, then the French sprayer maker Blanchard in 2008. Also that year the company expanded into balers, wrappers, drum mowers and maize harvesters with the purchase of the Kverneland Group’s Geldrop factory in Holland.

In 2011, Kuhn Group took a minority shareholding in the German company Rauch, best-known for pneumatic seed drills and fertiliser spreaders, and bought the American Krause Corporation, a maker of broadacre tillage equipment.

Its most recent purchase was the Brazilian self-propelled sprayer maker Montanna in 2014.