Auto loader has the job wrapped up 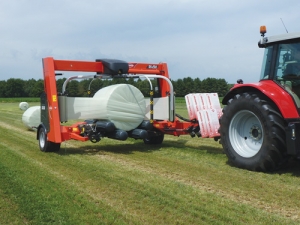 The SW 4014 wraps both square and round bales.

Awarded a silver medal at the 2015 Agritechnica Show for its ability to allow fully automatic wrapping of squares or rounds without the need for driver input, the system is said to improve output while minimising stress for the operator during long harvest days. In operation, the driver approaches a bale, which the system detects, then it scans the bale for length and sets the loading arms to a pre-set lifting position.

Heavy duty construction incorporates a hydraulic sliding frame, offers a wide track for stability, while the 'drive through' layout allows easy loading and good visibility of the wrapping cycle. In operation in the paddock the width is 4m which closes down to 2.5m for road transport.

The machine can wrap large square, medium-square or round bales up to 1500kg and 200cm long, and rounds up to 140cm diameter without any mechanical adjustment; the system can store multiple format and bale dimensions within the control terminal.

The layout and operation allows loading from the front or rear of the machine, which allows the retrieval of poorly dropped bales from difficult locations, and placement of wrapped bales back to ground level without any damage.

Shorter patented top rollers allow film roll holders to place film on the bale close to the centreline, resulting in less wrinkling and better oxygen exclusion; the IntelliWrap system allows accurate control of the number of wraps for best coverage, while the ISOBUS control system can be used to reposition bales in the preferred manner such as 'knots up' or 'drop on short side'.

Power requirement allows a range of tractors to be used, though a prerequisite is 45L of oil per minute. An optional PTO driven system can be specified which drives a closed circuit system, which reduces fuel requirement and any risk of contaminated oil getting into the wrapper system.