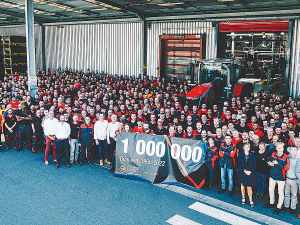 During the celebrations the keys of a MF 8S.305 Dyna-VT – the 1,000,000th tractor – were handed to farmer and contractor Thierry Aubrée from Brittany. He said, “I’m passionate about new technologies including RTK guidance, section control with a focus on soil preservation and sustainable farming practices. The MF 8S exudes this modernity thanks to its efficient engine, smooth transmission, perfect wheelbase and offers visibility, cab comfort and precision farming connectivity capabilities”.

The Beauvais tractor story started with the MF 825 in 1960. From there, the site grew continuously, producing favourites such as the MF 3000 series in 1986 – the first tractor with on-board electronics, and the MF 8600 in 2008, introducing the efficient power concept, reducing environmental impact courtesy of the first use of SCR technology on an ag machine.

In 2020, the new MF 8S arrived, featured a 24cm gap between the cab and the engine installation, said to reduce heat, noise and vibrations being transmitted to the cab, while at the same time improving cooling and performance.

On an operational front, from 2010 the site saw a major transformation through the implementation of Lean Manufacturing, contributing to improved quality and response to the growing demand of customers. In 2013, a factory extension programme commenced with the start of the Beauvais 2 cab assembly line. From 2019, vertical integration saw a new logistic centre, and the launch in 2020 of a Tractor Customisation Workshop.

Along the way, the plant was named Factory of the Year 2016, while also introducing additional manufacturing capability for small parts and prototypes using 3D printing. Key components, produced in house include hydraulics (1,340 parts references), gearbox reconditioning, the printing of tractor decals (300 references) and more recently the launch of a new unit to produce fuel and AdBlue tanks.