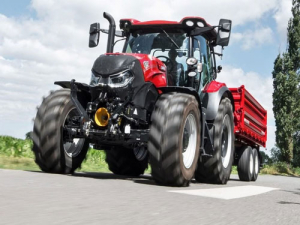 The Case IH Maxxum 145 Multicontroller has won Tractor of the Year 2019 and Best Design 2019 at the EIMA International farm equipment show in Bologna, Italy.

Launched last year alongside three smaller 116-135hp (rated) models, the highlights of the 4-cylinder 145hp Maxxum 145 Multicontroller include its ActiveDrive 8 eight-step semi-powershift transmission and the Multicontroller armrest and joystick — attributes recognised by TOTY judges as helping ease of operation and enhancing efficiency.

The TOTY award builds on the tractor’s previous achievements, including the lowest average specific fuel consumption recorded in the field work section of the PowerMix test by Germany’s DLG testing station.

Recent revisions to the Maxxum range have given the line a fresh new look, and in a double recognition the same model has also won the Best Design category, recognising the importance to functionality and form of a modern tractor’s styling.

Following its introduction last summer, the new Case IH Maxxum range, in its Multicontroller guise with the new ActiveDrive 8 semi-powershift transmission, also won Machine of the Year 2018 at Agritechnica in Hanover, Germany.

Farm machinery merchandiser Case IH says it has kept the wheels rolling on farms – despite formidable logistical challenges during the lockdown.