Catros+ gets nutrients right down to plant root levels 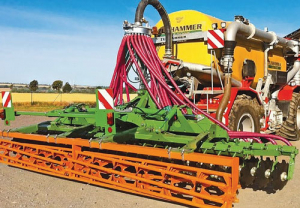 New Zealand farmers can learn plenty about effluent management from their European counterparts.

Northern hemisphere farmers have long valued the nutrient benefits of liquid and solid manures, and the machinery industry has developed plenty of machinery for application on grasslands and crops. For example, self-propelled machines have resulted from the need to handle high daily outputs within time or season constraints, often because spreading has been forbidden at weekends.

Much of the material used in the cropping sector in Europe originates from the pig industry, well known for its problems with odours, prompting cultivation and seeding specialist Amazone to exploit the opportunity provided by its larger Catros disc cultivators.

The 7 - 9m Catros+ machines can be equipped with distribution heads fed by an umbilical connection to incorporate liquid effluent during cultivation, so getting nutrients to the plant root levels, with the added benefit of minimising odours in sensitive areas.

To deal with the corrosive effluents being used, machines are supplied with modified seals on the disc bearing assemblies and extra greasing points throughout the machine frames.

Distribution heads are sourced from industry leaders Vogelsang, who can supply their DosiMat or ExaCut heads dependant on the material and quantity being applied.

In operation, delivery pipes take material to a point ahead of the front rows of discs where it is mixed with the surface levels. A second set of discs further incorporate the effluent to depths between 3 and 14 cm for effective use.

AMAZONE has raised the bar in the area of partial width spraying technology.