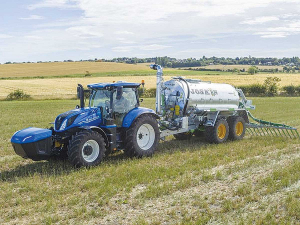 New Holland has announced its revolutionary tractor is reaching the final stages of testing for “commercial availability” later in the year.

Now New Holland has announced its revolutionary tractor is reaching the final stages of testing for “commercial availability” later in the year.

NH Brand President, Carlo Lambro, explained, “we developed the Energy-Independent Farm model, at a farm near Milan, showing how a closed loop between agricultural production and energy generation can make farming CO2-neutral, or even carbon negative. This year we are taking a further step into turning this into a reality, as our methane-powered tractor enters the New Holland range.”

With field trails nearing completion, the middle of the year should see production units being delivered to selected customers in Germany, France, Italy, the UK and the Benelux regions, all markets where biogas production is well advanced.

The machinery giant has confirmed that the methane-powered tractor will enter the New Holland range by the end of the year and be available to all customers in Europe and other markets around the world.

The latest New Holland T8 GENESIS is said to capitalise on the productive combinations of Stage V horsepower and digital technology.