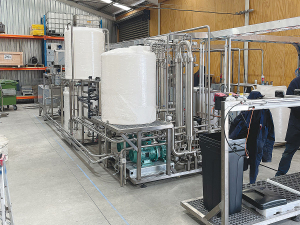 Forsi is taking its technology abroad, such as a project about to be commissioned at the City University of Hong Kong.

While well known in New Zealand’s dairying circles, Matamata-based Forsi Innovations are also sought further afield, such as a project about to be commissioned at the City University of Hong Kong.

This university was undertaking a new and sizable project to set up a dairy veterinary training facility just outside of central Hong Kong, in the Kowloon province. The facility takes the form of a small dairy farm, housing 50 adult and 25 young stock in a barn-type set up, using bought-in feed and milking through a single-sided 9-bale herringbone shed.

Forsi was approached as it seemed one of the few companies in the world that could filter all the effluent from the barns and milking shed to a strictly regulated and very high standard for discharge back into the municipal wastewater system. The fact they were able to supply a bespoke system that met the specific needs of the university’s project, helped Forsi get the contract.

Meeting Hong Kong’s extremely strict water discharge regulations requires no uncontrolled discharges, with all reject liquid waste from the filter elements captured in an absorbent medium, which is eventually used as a slow-release fertiliser on a farm or market garden.

The system comprises of a series of separation processes, each stage taking out a certain sized particulate, getting finer with each step. The end process is a reverse osmosis (RO) filtration that removes any viruses or pathogens.

The system also includes an in-built sanitation system that ensures no bacterial growth will occur in the treated liquid after the RO process, allowing it to be stored and hold its quality until required. The Forsi system has built-in redundancy: it is a two-in-one unit, meaning that if there is an issue with any part of the process, one side can be shut down and the other side started up. The design allows full monitoring and remote access to the system from Forsi’s Matamata HQ, as well as local oversight from a team in Hong Kong.

The quality of water discharged from the system is equal to that of drinking water standards, a benchmark set by the governing body in Hong Kong because there was no clean water standard for effluent and a defined parameter needed to be set.

Craig Hawes from Forsi says, this technology is revolutionary and can be adapted to any wastewater situation, not just effluent.

“We originally developed the system for the New Zealand dairy effluent situation that was prevalent back in 2014-15, but due to the dairy payout dropping as it did for the 2016 season, effluent systems were no longer priorities for farmers.

“As the focus returns to better effluent management, our modular systems can be configured for basic separation situations, but with added filtration elements, can deliver high quality water for ‘flood washing’ holding yards, with the added benefit of reduced bacterial loading that stops the development of slime, alongside better hoof health.”