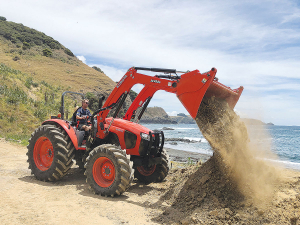 Kubota says it is proud to have the RTV520 on show at the event, featuring a host of upgrades.

Kubota New Zealand product specialist Shaun Monteith said Kubota is proud to have the RTV520 on show at the event, featuring a host of upgrades, while building on many of the unique features first seen in the RTV 500.

“Our quiet and reliable Kubota petrol engine has always been a strong selling feature on the RTV500, but the new RTV520 has gained a bit of extra grunt; increasing from 15.8 to 17.4 horsepower,” Monteith said.

One of the more noticeable upgrades on the new model is suspension performance, with a new five link rear system that increases the suspension travel by 30%, complemented up front by an increase of 20%, both combining to ensure a smooth and comfortable ride, even in the roughest terrain.

Also, on show is the M5-1 ROPS tractor, so with ROPS tractors making up 30 per cent of tractors in their horsepower category in New Zealand, the M5-1 series should fill a gap in the market for Kubota.

“We’re excited to bring the M5-1 ROPS model to New Zealand, where its advanced simplicity allows for easy movement and its short height increases its practicality, with more horsepower at lower speed means greater fuel efficiency and a longer working day before the need to refuel,” says Monteith.

Completing the range on show will be the second generation M7-2 tractor, that improves on its predecessors with a Closed Centre Load Sensing, an upgraded powershift transmission, and new electronic mapping on its 6.1 litre, 4-cylinder engine.

Said to be easier to use, with the improved performance bringing greater efficiency, the CCLS hydraulic system has a greater capacity than the M7-1, while the powershift transmission now offering 30 speeds (54 forward/27 reverse when a creep set is fitted) compared to the previous 24speeds, so allowing the operator to find the optimal gear for each job.