Kuhn keeping up with fast movers 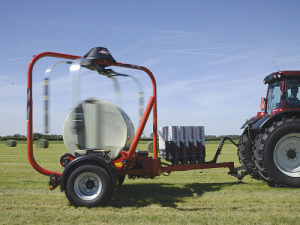 Stand-alone bale wrappers have fallen from favour over the last decade, the job going instead to baler/combination units. This is because older models were not able to keep up with modern, high speed balers.

It has a new appearance, an extended loading arm that loads bales faster and more gently, larger mudguards that prevent film damage during transport, a hydraulic unit protected by a large side cover that allows excellent access for maintenance, and the unit can be towed sideways with wider or larger tractors thanks to its long drawbar.

The machine achieves optimum crop quality using a combination of Kuhn’s 3-D wrapping and the maker’s IntelliWrap, resulting in well-shaped tightly sealed bales. The 3D wrap first applies film to the corners of the bale then wraps the barrel, excluding more air.

After finishing the 3D wrapping cycle, the conventional wrapping will cover the remaining bale surface with stretch film. In this, IntelliWrap offers full wrapping flexibility in the layers of film applied to match the user’s crop conditions and intended storage duration.

Driver comfort is said to be enhanced by the AutoLoad function that gives fully automatic loading, wrapping and unloading, allowing the operator concentrate on driving.

Meanwhile, AutoSwitch controls the switching of the wrapper from transport to field mode at the touch of one button.

In the cab, the new Kuhn VT 30 control box gives the operator a complete overview of the wrapping process via a 3.5” colour touchscreen, a user-friendly interface and intuitive software.

ProcessView software updates the operator on the stage of wrapping and ongoing and upcoming wrapping processes, and allows pausing and restarting a process at any time.