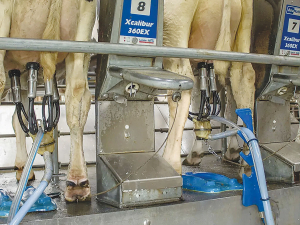 Manufactured from highdensity polyurethane, the support eliminates any weight bias between the front and rear quarters.

The product was developed after herd management software, used at Metcalfe Farms in North Yorkshire UK, revealed twice as many mastitis cases were affecting front, compared to the rear quarters, despite the herd having very low cases overall.

Manufactured from high-density polyurethane, the support eliminates any weight bias between the front and rear quarters, a problem that may go undetected, but can be the underlying cause of many of the increased mastitis incidences in the forequarters.

The support takes the form of an individual pivot at each milking point, trialled initially from 2019, on Metcalfe Farms 72-point rotary parlour. Once the cluster is attached, the milk and pulsator tubes are dropped into one of three slots in the support, largely driven by the shape of the animal’s udder.

The ACR cord is placed in the same or a lower slot, so that when milking is completed and the ACR activates, the retracting cord causes the pivot to move back to its rest position.

Designed and manufactured by a local agricultural engineering company, the patented supports typically cost about $300 each, meaning that they would typically pay for themselves in around four months, factoring the loss of milk and the time needed to get back to the typical pre-infection yield. Lactalign can be fitted to rotary, rapid exit and herringbone configurations.