No mucking around with manure gear 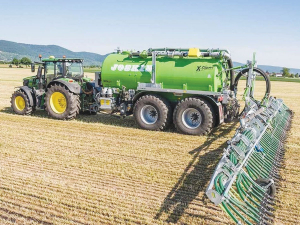 John Deere's HarvestLab 3000 system has won the company a European Land and Soil Management Award at a Forum for Agriculture event.

The system uses sensors to automatically measure the nutrient values of effluent being applied to the paddock.

The technology prevents under- or over-application and it can record total volumes applied for future reference. It is compatible with site-specific prescription maps.

The award to John Deere is endorsed by the European Union in association with the University of National Resources and Life Sciences (BOKU) in Vienna.

Meanwhile, the two Netherlands effluent gear manufacturers Schuitemaker and Veenhuis say they will merge later in 2019.

Schuitemaker is well known for its heavy-duty, self-loading silage wagons, manure spreaders and vacuum tankers, and Veenhuis specialises in slurry tankers and related equipment including a system to analyse the nutrient content of manures.

The companies say the merger will add value in marketing, sales, production and product support.

Schuitemaker, based in Rijssen, employs about 140 people while Veenhuis, at Raalte, has about 40 workers. Since November 2018, The regional investment company Wadinko is believed to have owned 36.25% of Schuitemaker since November 2018. It will remain involved after the merger.

Tractor of the future?

John Deere looks to be heading towards autonomous tractors.

John Deere has updated its lineup of 7R series tractors for 2020, with a choice of seven models from 210 to 330 horsepower.