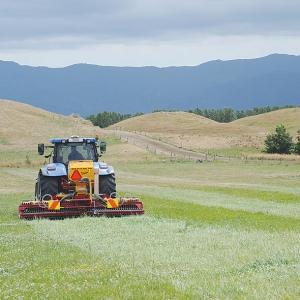 “Overseeders available in New Zealand to date have been more suitable for the arable market, with the closest coulter spacing of 125mm suitable for cropping but limited for pasture renovation,” says agriculture equipment operations manager Paul Collins.

Vredo’s double discs, spaced at 75mm, handle all soil types and conditions, dropping the seed into a vee shaped slot, with each disc’s individual spring controlling the depth of seed placement. Fluted following rollers which float independently of the discs then close the slot to ensure good soil-to-seed contact and subsequent dense and healthy sward rejuvenation.

“Whilst impressive germination rates of up to 96% have been confirmed by German trials, the Vredo system is not limited to pasture renovation and all small seeds can be sown, into existing pastures or sprayed pastures and cropping applications,” says Collins.

The range includes models from 2.5m to 5.8m working width, with gravity feed and air delivery.

“For farmers on reasonably flat land, the gravity feed Agri series” single unit of either 2.5m or 2.9m working width would be ideal.

Agri Air air-delivery models are more suitable for farmers on undulating terrain. For contractors, the Agri Twin, with air delivery and cover to 5.8m would fit the bill well,” says Collins.

Vredo is a Dutch company which started in 1947 in agricultural contracting. The founder, Ben de Vree, modified and improved his own machinery, giving birth to a manufacturing business.  Its first Vredo overseeder was launched in 1976 as a means of producing a healthy pasture sward from a tired one, at minimal cost.

Having been an agricultural contractor, de Vree realised the importance of quality and reliability, both hallmarks of the Vredo overseeders, CB Norwood says.