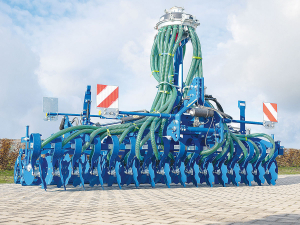 While war in Ukraine caused a marked increase in the cost of inorganic fertilisers, many manufacturers were already taking steps to increase their product range to make better use of organic manures and effluent.

From March 2022, German cultivation specialists Lemken has announced that its Heliodor compact disc harrow will be available with a preparation set for attaching a Vogelsang DosiMat DMX precision spreader, resulting in a combination that will offer precise low-loss spreading and incorporation of slurry and effluents.

The Heliodor cultivator is compact and low draught, said to place little demand on the tractor, while the DosiMat DMX offers an even transverse and longitudinal distribution, alongside the ability to achieve a wide range of application rates.

In operation, slurry or effluent is fed into the DosiMat from above, then chopped and blended by a flow-optimised rotor equipped with cutting blades, and then pushed into the individual outlets.

Slurry passes via hoses to the area behind the first row of discs on the cultivator, where it is injected into the soil and immediately incorporated by the second row of discs and the trailing roller without delay, reducing losses or odour.