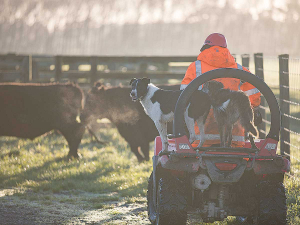 If you ride a quad, put a crush protection device on it, says Worksafe New Zealand.

Some farmers might think health and safety on farms is all a matter of ‘common sense’, or that young ‘ignorant’ people are the ones getting hurt, while experienced farmers know what they are doing and are safer as a result. The thing with ‘common sense’ is that it can’t be relied on as a measure and method of good health and safety between people.

Many people being killed when using light vehicles are experienced farmers over the age of 55, who will claim they know what they’re doing on their own land, often on dairy farms.

The way we farm creates an environment where we have a long list of things to do and only just enough resource (including people and time) to do it. This is important – the reality is that anyone who works in the manner and environments that farmers do, could make errors of judgement and end up in a situation that can harm them. Experienced people who have really good practices and procedures make mistakes too. And those mistakes can kill them.

So how can farmers manage risk in a way that isn’t reliant on judgement, where fatigue or stress can’t affect decision-making?

You upgrade to safer ways of doing things or put in place something that stops the human being harmed when an incident occurs.

Think about questions like ‘what is the safest vehicle for me to use so an incident doesn’t occur?’, or ‘what vehicle can I use so if something happens, it offers me more protection?’

This might mean using an electric mountain bike – light, agile, unlikely to break a leg if you fall under it – instead of a standard two-wheeler, side-by-side or quadbike. Or it might mean using a low-seat two wheeler that you can put both feet flat on the ground to stabilise as you watch stock. Choosing the right vehicle is one of the most important safety decisions you can make.

And then you can also use equipment to make your vehicles even safer to protect you, your workers, and anyone else who might use them.

If it’s likely you might smack your head on something, wear a helmet. All the research for pushbikes, motorbikes and ATVs and LUVs show a good helmet can prevent brain injury. WorkSafe did a detailed analysis of reports for 355 incidents involving quads which showed head injuries resulted in 21% of incidents. Head injuries were present in 40% of fatal farm quad-bike incidents. Nobody who was wearing a helmet died from head injuries.

If you’re in a vehicle with a roll cage such as LUV, ute, light truck, or tractor, put your seatbelt on.

Our look at NZ farm fatalities show that 90% of fatalities where a seat belt was relevant could have been prevented if the person was wearing that seatbelt. Looking at people who survived – if you’re wearing a seatbelt, your injuries are significantly less serious than if you are thrown from the vehicle.

Our death toll on farms could be halved by doing just two things. Put a CPD on your quad and wear your seat belt. That’s real common sense – accept you’re going to make mistakes and do what the data shows us will help prevent harm when you do.

Here to help not harm - claim

Is it time farmers looked at workplace health and safety from an unfamiliar perspective?