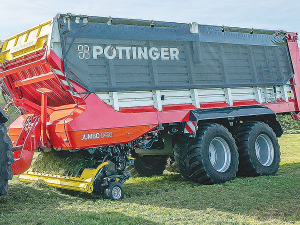 Available from August 2022 in Europe, Pottinger’s new Jumbo 8000 Series loader wagons are said to chop 30% shorter, with only a minimal increase in horsepower.

So much so that the manufacturer is claiming the machines can deliver daily outputs in excess of a self-propelled forage harvester on a tonnes per hp basis.

Incorporating a new drive concept, rotor and chopping system with 65 knives, the new layout can deliver a theoretical chop length of only 25mm while only requiring 15% more power, with the company noting that the shorter chop length will allow better consolidation in the stack and a quicker lowering of the pH value.

Each of the 65 knives is individually protected against foreign object ingress, while the automated loading system is now fitted with an additional optical sensor at the rotor scraper carrier. This is said to result in the combination of four sensors, including rotor torque, hydraulic pressure and material loading sensing to optimise the loading process.

In operation, the new sensor system detects pre-compression of the forage directly above the chopping rotor, then activates the scraper floor before any overload or damage occurs, alongside making optimum use of the available load space.

This results in around 10% greater capacity overall, when compared to the more traditional 34mm chop length in current machines.

Key differences compared to the 7000 series include a 850mm diameter rotor and the 65 knives, compared to a 48 knife set up on the former Options carried over include the electronically steered axles, that eliminate the need for steering angle sensors between the tractor and the wagon.

In other Pottinger news, the company has taken out the Farm Machine 2022 Award, in the harvesting category, for its Jumbo 7000 Series. The jury of 12 international machinery journalists gave the award in recognition of, “the uniqueness of the multi-purpose loader wagon, with its new drive concept, optimal power transmission and other innovative core components”.