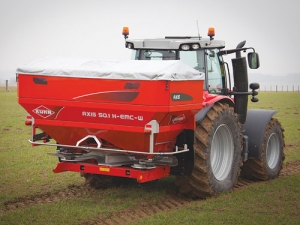 Features cited were the machine’s ability to precisely regulate and spread a range of fertilisers.

The 50.1 uses patented technologies such as coaxial distribution adjustment (CDA) and electronic mass control (EMC) for regulating and weighing the product: CDA uses a pivoting hopper and contoured outlets to ensure constant flow and the drop point of the product onto the spreading discs; EMC measures load on the spreader discs, and adjusts their speed individually to remain constant.

The machine can hold 3000-4000L and spread from 18 to 50m width depending on material, and the unique feature of its hydraulically driven spreader discs – maintaining their target speed irrespective of tractor engine revs.

The unit has two weigh cells that display the amount of material spread and the weight of fertiliser remaining in the hopper.

Other features include on-the-move adjustment of application rates, and adjustment of spread patterns catering for borders or irregular field shapes.

The machine is extremely flexible with minimum spread rates as low as 3kg/ha and up to 500kg/minute at speeds of up to 16.5km/h.

Control is via an ISOBUS system that can perform variable rate applications when used with a GPS system. – Mark Daniel

Bogballe focusses on one product line, building fertiliser spreaders every day, with a history that dates back over 70 years and sees the blue spreaders made in Denmark exported to over 100 countries around the globe.

Bogballe focusses on one product line, building fertiliser spreaders every day, with a history that dates back over 70 years and sees the blue spreaders made in Denmark exported to over 100 countries around the globe. 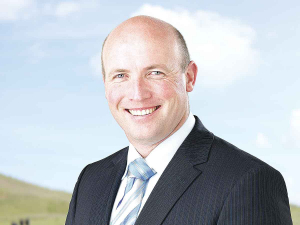