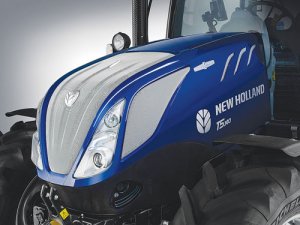 The new T5 Auto Command tractor series, which was unveiled at EIMA 2018, has CVT said to be ideal for livestock and mixed farming.

The judges especially liked the machine’s fully under-hood HI-eSCR2 life-long exhaust gas after-treatment system. This improves visibility and manoeuvrability, increases operating versatility and raises the level of operator safety during inter-row and grassland operations, thanks to the increased ground clearance.

Rated power on these tractors is from 110 to 140hp, which means up to 20hp more is available than on the current T5.120 Electro Command model.

NH also got a special mention for its patented intelligent trailer braking system which improves tractor stability during deceleration when towing a trailer, resulting in increased safety during transport operations.

The system acts by detecting the reduction in tractor speed and calculating the deceleration force.