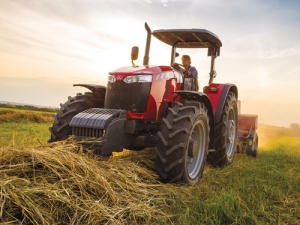 The 80-100hp tractor continues to be the workhorse in NZ, especially on dairy farms, and the picture is the same in the world's markets.

Hence designers at Massey Ferguson starting with a clean sheet and $350 million to design the Global Series with all the best points of utility tractors updated for the 21st century. Having seen the results of this project in the 4700 series in 2014, the imminent arrival of new 5700 models is sure to get the red and silver tractor fans excited.

The new 5709 and 5710 offer 92 and 102hp from the 4-cylinder, turbo-charged AGCO Power engines displacing 4.4L, and offering up to 410Nm torque at 1500rpm. These are mated to a 12 x12 transmission with six speeds, two ranges and a wet clutch / power shuttle operated by a lever under the left side of the steering wheel. As on the larger series this lever controls forward / reverse direction changes, and includes controls for aggressiveness of drive take-up, and a de-clutching action for making speed changes, all without using the the clutch pedal.

Levers either side of the seat control speeds and hi-lo ranges, acting directly on the gearbox selector rails for simple, easy and reliable operation.

4WD front axles have 55 degrees of steering angle for tight turns, and a 100% locking differential means positive traction is ensured in the toughest conditions. Rubber takes the form of 'meaty' radial tyres of 540-65R34 at the rear and 440-65 R24 at the front.

At the business end, a heavy-duty rear axle offers lift capacities up to 3300kg, and an open centre hydraulic system has flow up to 98L/min via twin gear pumps, the first powering the three point linkage and two rear remote valves, the second taking care of power steering, 4WD engagement, diff-lock and PTO. A six spline PTO runs at 540 or 540E speeds.

NZ spec tractors are offered in Essential Specification (ES) -- a semi-suspended, flat operator platform, levers on either side of the driver's seat for speed and range changes, pendant pedals suspended from the underside of the centre console, and hydraulic 'wet' brakes.

Just before Christmas, Massey Ferguson quietly released details of the successor to its popular MF 5700S range in the shape of the new 5S Series.