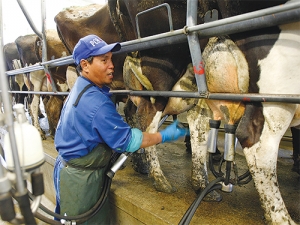 The milking shed at Keswick farm is a short drive from Rangiora's bustling town centre and like the town's mainstreet there's a tight squeeze on parking when the cows come for afternoon milking.

This 530-strong herd owned by Richard Stalker indicates why North Canterbury outperforms the national averages in the milk stats.

Given the long drought in parts of North Canterbury, Dairy News has visited a top-performing farm to find out how they are able to produce 10% more than the national average.

The operations manager on this 160ha farm, Bob Bolanos, puts this difference down to a few things – size, better weather and farmers more open to sharing and learning.

Canterbury dairy farms tend to be larger than North Island farms; and while bigger isn't necessarily better, Bolanos says it brings with it economies of scale you can't get on a smaller farms especially in stockfeed deals and silage, and this gives you more 'elbow room'.

During his ten years as a dairy farmer in New Zealand, Bolanos has come to believe that Canterbury's more settled weather helps the cows achieve better milk stats. With Otago and Southland generally getting colder weather and the West Coast getting the nor-westers, North Canterbury is ideal for feed growth when combined with irrigation.

And Bolanos, in his time working on nine different NZ dairy farms, finds Canterbury farmers keener to use outside consultants and experts for advice. They also are ready to try new things, for example talking about his farm's transition to fodder beet as a winter feed.

Fodder beet was a revelation to them Bolanos says, with results that give them 40 tonne/ha at a cost of 9c/kgDM, this maintaining cow condition and milk production at much lower cost than the equivalent grass.

Keswick farm is a member of two dairy advice groups where farmers can share ideas and issues. Knowledge shared between these groups lead to Bolanos attending an irrigation seminar, which enabled them to tweak their irrigation to maximise grass growth.

Bolanos praises owner Richard Stalker's willingness to learn as a key aspect of improving the operation. The farm has won many awards for its operation, proudly displaying them in the staff workroom.

The latest was for most improved milk quality in the area. The results speak for themselves as only three cows in the herd had mastitis this year.

The quest for improvement has kept Bolanos at the farm; the three years he has stayed here is his longest stay on one NZ farm. This culture of improvement in Canterbury is why Bolanos believes they can outperform other regions.