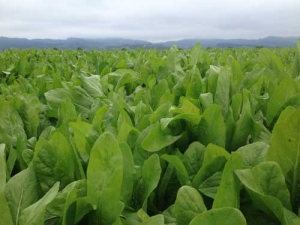 One response to tight economic circumstances for many dairy farmers is to look at reducing the amount of feed they buy in for their cows, says fertiliser co-op Ravensdown.

The challenge many face is finding the best crop to see them through different times of the year.

Brendon and Rochelle O'Leary milk 400 cows on 85ha at Gordonton, north of Hamilton. To increase efficiency they have split calving, with 310 cows calving in the autumn (from March 10) and the other 90 in the spring (from July 10).

Chicory has been a part of their summer cropping programme for six seasons.

"It's a high-quality feed with good protein levels so the cow's milk well on it over summer. We're very pleased with the results it has given us," Brendon says.

Thirty hectares of maize silage and 100 tonne DM of grass silage is grown on a runoff about 18km away at Orini, where they graze their young stock.

"We bring a lot of feed onto this farm. We milk twice a day with the cows fed on a feed pad. They are high producing Friesian and Friesian-cross cows with a lactation length of 305 days on average producing 480kg of milk solids per cow."

The O'Leary's selected chicory as a summer crop and grow it on peat soils as part of the pasture renovation process on the farm.

"We grow enough maize silage off the farm. We needed a crop we could graze on the platform during milking. Chicory has high protein and gives us high yields so it was a perfect fit for what we required in a summer crop."

The O'Learys say they spray the paddocks in September with the chicory planted in October. A post-emergence spray follows, after germination (usually about 23 days after sowing) to take out any broadleaf weeds and any summer grasses coming through at the same time.

"It is most important to keep chicory weed-free to get the best yield out of it," Brendon says.

The chicory is grazed from early December until April with a rotation of about 23 days. The crop's yield is about 18-20 tonne per hectare for the season.

"Chicory grows well over summer because it has a big tap root that gets down into the moisture and continues to grow a lot better than pasture would at the same time of year. We continue grazing it until about the end of April and then spray it out and put the paddock into permanent pasture."

The O'Leary's say that support from Ravensdown's agri manager Sarah Sexton helped them maximise forage production and they will plant another 20ha of chicory again this spring.

Ravensdown farmer shareholders will get $33 million in rebates for the 2020-21 financial year.

Farmers urged to get on board

Former Ravensdown board member Scott Gower is calling for farmers to step up and participate on boards of their co-operatives.