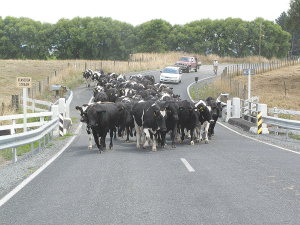 Ahead of Moving Day, insurer FMG is offering up three tips for farmers and contract milkers.

Rural insurer FMG is offering up three tips for farmers and contract milkers to support a successful Moving Day this year.

“In the lead up to, and including Moving Day, FMG sees an increase in theft claims for many regions. Higher value, easily re-sellable items are magnets for thieves and in our experience lower value quad bikes, chainsaws, tools, fuel, and firearms are commonly stolen around this time,” says Cantwell.

He says that now is the time to take steps to make sure that your gear is there when you get to a new property.

“Firstly, look out for each other and if you see something suspicious then report it to the police. As you’re packing up, take the time to record the details and serial numbers of high value assets on SNAP, a free online asset register created by the NZ Police. You may also want to engrave your gear so that if it is stolen, the police can identify it,” Cantwell says.

“Remain vigilant and don’t leave keys in vehicles or bikes, and if you can, park them in a shed at night. Also, use high-spec padlocks on sheds.”

“Last year, FMG received over 1,000 milk claims amounting to $4.3 million. Around one third of these claims were due to antibiotic contamination – including chiller failure and forgetting to turn on the vat,” he says.

He says that, to help bring new sharemilkers or employees up to speed, farmers should ensure their milk shed’s systems and processes are documented and located in the shed.

“When explaining how your milk shed operates be aware of different learning styles – some people may prefer visual charts to written instructions, and some may learn best by you running through in person,” he says.

Finally, Cantwell says that if you’re making a step up into a contract or sharemilking role and becoming a limited liability company, or even if you’ve been one for a while make sure you’re aware of your responsibilities as a director and/or officer.

He says that the New Zealand Companies Office has resources available as an introduction.

“Given the seriousness of this area, we also recommended you get legal advice – unfortunately, ignorance offers little defence if something goes wrong.

“The team at FMG wish all farmers a safe and successful Moving Day this year,” says Stephen.

Ready for the big move

Marc and Nia Jones are getting ready to move farm on 1 June to a new sharemilking opportunity at a 370-hectare farm at Mamaku.