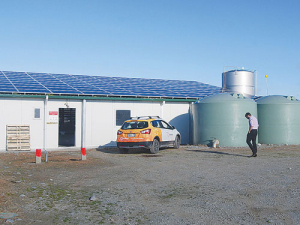 A 30kW solar installation on a rotary milking shed near Rakaia.

Wells sees huge potential for solar power on farms: electricity charges for a dairy shed average $5000 - $6000 a month and solar panels now cost only about 8% of what they did 10 years ago.

Sunergy in March commissioned a 30kW installation on a dairy shed near Rakaia; its performance data show it should pay for itself in four years and three months, Wells says.

“We tell farmers this is a good investment [giving] a better return than farming. It’s going to lower your overheads so that if things turn down again you’re running a lower cost structure; you’re going to be more sustainable.”

Farm manager Gary McGregor says that he -- as the sharemilker who pays the shed bills -- and the farm owner, a big conglomerate with at least 50 South Island dairy farms, are interested to see how the installation performs. The owner will treat it as a pilot for its other farms.

Despite an overcast autumn it is performing as promised, exporting power to Meridian Energy.

Best returns are expected in the spring and summer peak of milk production and sunshine hours.

“It’s environmentally a good thing to do for our carbon footprint. It’s a good story if it can pay its way, and it appears it will. Everything Andrew said about it, it has delivered, in what’s got to be described as a below-average season,” said McGregor.

Wells says that before they design a system for a customer, Sunergy installs a data logger to measure the actual power usage throughout the day and compare it to NIWA figures for local sunshine. They have done analyses for dairy sheds, pig farms, cropping farm coolstores and service stations.

In a dairy shed the big loads usually come during milking at each end of the day. Though this doesn’t match peak sunshine time, middle-of-the-day unwanted power can usually be sold back to the power supplier. The Rakaia installation took three days, Wells says. “There’s no infrastructure, no resource consent. We bolt it onto an existing roof.”

The payback time for a residential installation (not depreciable) is reckoned about six years, but the company conservatively tells customers seven or eight years.

A calculator on the Energy Efficiency and Conservation Authority (EECA) website suggests a payback period of 20 years for residential systems, but Wells says this is misleading because it factors in the ‘opportunity cost’ of withholding money from investments. But solar energy is itself an investment, he says. “The numbers speak for themselves.”

Energy management is a key way dairy farmers and sharemilkers can cut costs and improve profits.