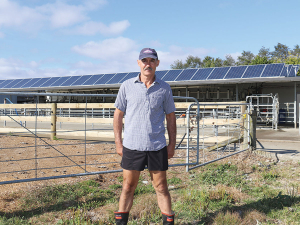 It might be called a ‘blue skies’ solution and in a way it is.

Eight months ago Matthew and Suzanne Jackson boldly decided to install 66 solar panels capable of generating some – but not all – of the power to run their 27-cup herringbone shed.

Milking shed power had been costing them $2000 per month; since their solar power start-up it does not exceed $1000/month.

The Jacksons run 250 Friesian cows on their 100ha farm and on average they produce 120,000kgMS/year. They have owned the farm for four years after contract milking there for the previous four years.

Matthew has worked on dairy farms since he left school at 16 and before that he milked morning and afternoon while still at college.

The rising cost of electricity was the prompt for the Jacksons’ switch to solar power.

“It didn’t seem to matter how much we did, such as using power between 10pm and 4am, the power bill was essentially the same,” Matthew said.

“So we looked into solar power and in the end it ticked all the boxes; we were surprised at the returns we were told we could get out of it.”

The panels power the shed only from sunrise so, because the Jacksons have no storage batteries, they must buy power for the early-morning milking from their power company.

In the afternoon, when solar power is at its peak, the roof panels entirely power the afternoon milking, Matthew says.

“About 5pm the sun goes off the panels but we are well finished by then; and a lot of milk chilling is also done by the panels.

“Our hot water cylinders are now solar powered so we have two hot washes a day just because we can – the hot water is there.

“Overall we get about 55% of our electricity from the panels.” Only in July, when the cows are dry, is there no direct benefit from solar.”

During the day, the panels produce more power than the shed needs.

“Surplus power goes back into the grid, for which the power company pays us 8c/kWh. It costs us 30c/kWh to buy power from them, so the credit we get from the power we generate comes off our power bill; even if it is only 8c/kWh it helps.”

The Jackson have also installed ten panels on their house roof, using the power to heat water for the washing machine and dishwasher – small but useful savings.

Maintenance is low: the panels need an annual clean and are expected to last 25 years.

The system cost $43,000 but Matthew says the economics stack up. Since start-up last July he reckons he has saved nearly $6000.

He and Suzanne are happy with their decision, “and we’ll be even happier in six years when it’s all paid for”.

Energy management is a key way dairy farmers and sharemilkers can cut costs and improve profits.