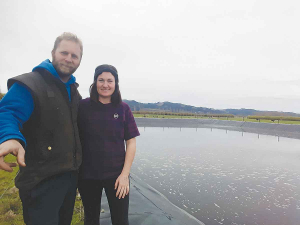 The Waikato Regional Council was on the case and the Paynes were keen to sort the issue out quickly. That’s when the Otaua farmers decided to use BioMagic and its Impact effluent treatment. Today, the council case is closed and there are no complaints about odour from the effluent pond.

The Paynes decided to invest in an effluent pond early last year.  With 200 cows on the 71ha farm, they are required under council regulations to have 90-day storage.

The new pond was constructed before the start of the 2019-20 milking in July. However, by September complaints were coming in from neighbours.

“There was no doubt that the smell was there, even we noticed the smell when the wind blew it towards out house,” Rebecca Payne told Dairy News.

“The pond had a thick foamy layer on the surface.”

The Paynes then decided to turn to BioMagic, who were very helpful.

Following treatment with Biomagic’s Impact, Rebecca says the foamy layer on the effluent pond disappeared and lots of bubbles were forming in the pond.

“There was certainly something happening in the pond,” she says.

But on Christmas Eve, the family was contacted by the council about fresh complaints from neighbours.

Rebecca says they contacted BioMagic again and worked with team to strengthen the dosage of Impact effluent treatment. This led to the elimination of the smell.

“The BioMagic team was great, they worked with us closely and followed up with weekly calls to check on progress,” she says.

“We were told that we left the treatment too late and this caused the foamy layer and the bad smell.”

Rebecca’s advice is that farmers should BioMagic from day one to be sure about keeping odour away.

She says the council has now informed them that the case is closed and there are no complaints from neighbours.

She thanked BioMagic for helping them out.

“They were a constant support with information and provided the extra strong products to help the situation.”

These bacteria digest effluent up to 12 times faster.

Once digested, the effluent can increase the plant available nitrogen up to 300%, the solids and odour are substantially reduced.