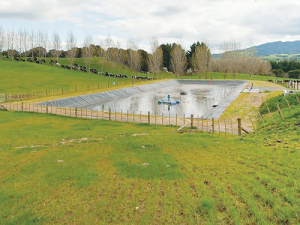 Dairy effluent is a great source of nutrients for growing pasture.

Dairy effluent is a great source of nutrients for growing pasture, but managed improperly it can let loose lots of contaminants that harm waterways.

Understanding how soil properties affect nutrient loss is the key to maximising the benefits of effluent and minimising its impacts on waterways.

Soil texture and structure determine the amount of water that can enter and be retained within a particular soil, and the rate of transmission of excess water through that soil. So effluent irrigation systems should be matched to soil properties to minimise runoff and leaching.

The rate at which effluent can be applied to land for maximum production benefit is determined by the soil’s properties, such as structure, porosity and infiltration rate.

Movement of water through soil pores is generally described as hydraulic conductivity; when this conductivity is low, irrigation of effluent will result in ponding and run-off once the total water capacity of the soil is exceeded or if application rate exceeds infiltration rate.

Low rates of hydraulic conductivity are found in soils that are poorly drained, and ponding and runoff often occur with high rainfall. Many of these soils are artificially drained to reduce the incidence of ponding and waterlogging, and this carries a risk that effluent can bypass the soil and be directed rapidly into waterways

Soils that have low available water holding capacities are the shallow to moderately deep soils, as well as sandy or stony soils. Effluent irrigation on these soils is likely to result in leaching, unless it is applied at low rates and in small doses. The irrigation system on these soils must be capable of low rates of application to gain the maximum nutrient benefit.

Drainage and the level of biological activity of the soil at the application site are important. Aim to apply effluent at a rate that keeps it in the root zone, so that the nutrients can be utilised by pasture.

Permeable soils, with a deep water table and no drainage limits, are best for putting effluent on. However, on stony soils the risk of effluent draining directly into groundwater is an issue to consider. In such situations, application depths and rates should be adjusted to account for this risk.

Another issue is ‘bypass flow’. When effluent application rates are higher than infiltration rates, water can enter continuous macro-pores that are open at the soil surface and then move very rapidly via so-called ‘bypass flow’ through a relatively dry soil matrix. This means little opportunity for the water to be retained within the root zone and high leaching of nitrate is likely to occur.

Bypass flow of farm dairy effluent can occur in soils that undergo shrinkage and fissuring during drying, especially when these soils have been previously compacted by treading.

A key to avoiding over application can be having adequate effluent storage so that irrigation can be deferred if conditions aren’t right.

Things to consider when investing in effluent storage

Investing in effluent storage is a significant decision on-farm, so it’s worth taking the time to carefully plan what is needed to ensure the right design for your farm.