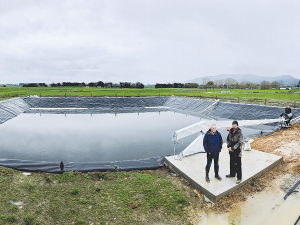 TGH is completing two years of effluent management improvements on three of its Waikato dairy farms.

The company's dairy farms in Waikato include Hukanui, Punawai and Tainui Rd. A fourth dairy farm, Mangatea, was already up to spec for effluent management.

Hukanui and Tainui Rd had been owned by TGH for 30 years. Mangatea and Punawai had been bought over the past two-three years. All farms supply Fonterra.

“All three of our recent upgrades had different systems such as tanks, lined ponds or unlined/sealed ponds,” said Jackways. “We wanted our effluent systems to meet compliance regulations, to reduce risk on the farms by having larger and safer storage capacity.

“We brought in experts to provide advice and help design the best and most cost effective solutions for our dairies,” Jackways said. “An additional benefit is that we’ll save on fertiliser costs, using effluent not fertiliser to irrigate larger areas of each farm.”

Improvements included relocating and upgrading the pump and stirrer system, a new gravel trap, an extension to the area that can be irrigated and a new irrigator.

Punawai is 85 ha and has 220 cows producing 65,000 kgMS/year. The farm now has a new storage tank replacing the old “geographically challenging” pond and, like Hukanui, it also has a new gravel trap, pump and stirrer, an extended irrigation area and a new irrigator.

Tainui Rd dairy is 250 ha and has 630 cows producing 200,000 kgMS/year. This has been upgraded with a new sump and gravel trap, new pump and stirrer and a new large, lined effluent pond.

All the upgrades were designed, managed and had equipment supplied by Waikato Milking Systems, which is one third owned by TGH.

Said Jackways, “It’s been a large combined investment for all the farms, but it’s something we had to do, to be complaint and sustainable in the long term.

“We’re a long term player in the dairy industry so it’s better to get it done properly now so we don’t have to revisit the problem later. The final result means our dairies are more efficient, sustainable and environmentally friendly for the future.”