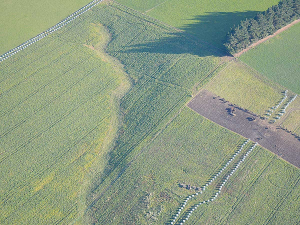 Encroachment of residential living onto productive farmland will mean the farmers who remain will face higher land values and higher rates.

In our quest to build houses for a burgeoning population, productive agricultural land is being swallowed up by housing developments.

With Auckland’s population set to hit 2 million in the next decade, pressure for both housing and food will rise.

New Zealand will have 6.8 million consumers by 2073, the Ministry for Environment (MfE) report says, and food growers will also be responding to overseas demand for New Zealand food exports.

While most dairy farms are not affected by the urban sprawl, if productive land was is not available for agriculture, it forces less suitable areas to be used.

The report goes on to say that the land used for agriculture has been decreasing since 2002. It says between 2017 and 2019 it fell by 2%. In terms of dairying, the report notes the increase in cow numbers and the greater use of irrigation, especially for dairy farming.

Any encroachment of residential living onto productive farmland not only means a loss of that farming land, it also has consequences for those farmers who remain.

They face higher land values and consequently higher rates, along with increased council rules and restrictions that fall upon them due to increased amenity expectations of those new urban residents.

Export earnings from NZ land-based primary industries shot up 91% - from $23 billion in 2010 to $44 billion in 2019. The MfE report notes the Government wants those earnings to grow by another $44 billion in the next decade to support post-covid economic recovery.

Federated Farmers describes this as “a hairy and audacious goal” when you consider that since 2002 nearly 1.9 million hectares has gone out of agriculture and horticulture production.

NZ farmers are just getting on with driving up production from less land and from management and genetic improvements. But there comes a time when they run up against the limits of nature and efficiency.

The time has come for NZ to better manage where we are building houses and stop building on land best suited to growing healthy food for people.

OPINION: Your canine crusader reckons genuine muck-ups made by bureaucrats can often be right on the money.