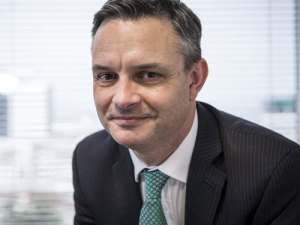 Will Climate Change Minister James Shaw take the split gas approach to the world at the COP26 conference?

They are hoping that Climate Change Minister James Shaw will go into bat for Kiwi dairy farmers and the world-leading split gas approach at the UN climate change conference, COP26.

New Zealand has a good story to tell: we are the world's lowest emissions dairy milk producer. On the global scene, NZ is a small contributor to global emissions.

And to do better, NZ aims to reduce greenhouse gas emissions from both long-lived gases (carbon dioxide and nitrous oxide) and short-lived gases (biogenic methane).

A split gas approach highlights the difference between short and long-lived gases and their individual impact on warming.

Methane is the main greenhouse gas after carbon dioxide. It has a higher heat-trapping potential than carbon dioxide but breaks down in the atmosphere faster - meaning that cutting methane emissions can have a rapid impact on reining in global warming.

Just days into the 13-day conference, world leaders pledged to cut methane emission levels by 30% by 2030. But the Global Methane Pledge is missing three of the top-five emitters: China, Russia and India.

DairyNZ wants to see an international agreement on split gas, because although methane does have an impact on short-term warming - and certainly shouldn't increase - keeping global warming under 1.5C is dependent on reducing long-lived gases.

"Being the lowest emissions producer of milk is no accident - it's the result of a lot of hard work by dairy farmers."

But whether this message is heard in Glasgow or drowned out by the 400 private jets that have flown leaders, dignitaries and their officials to the talkfest remains to be seen.

DairyNZ says the decision to allow an extra 500 international workers to help on dairy farms will help with the present shortage - estimated to be 4,000 workers.

OPINION: Climate Change Minister James Shaw seems to be in two minds whether cow numbers should be reduced in New Zealand to cut emissions.