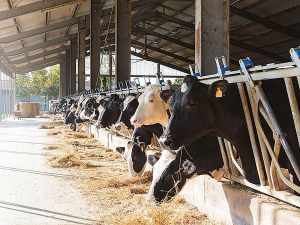 About 200 farmers will take part in the trial using the DSM product Bovaer later this year.

About 200 farmers will take part in the trial using the DSM product Bovaer later this year; if successful the use of the feed additive will be upscaled among 10,500 Dutch, Belgian and German farmers who own the co-op.

The trial follows the EU approval in February for the additive's use.

In New Zealand, Fonterra has been trialling Bovaer on some farms since the beginning of last year. The European trial is a joint undertaking between the Dutch companies FrieslandCampina, DSM, and Agrifirm, which will supply the feed additive.

FrieslandCampina chief executive office Hein Schumacher says the ultimate goal is for all its dairy products to be climate neutral.

"Though we can't achieve this overnight, we're working toward it. In addition to solutions like switching to green energy - preferably generated by our members - reducing the greenhouse gas emissions of our cows is one of the routes towards reaching our climate goal.

"We know that our members are always open to innovation and improvements in our sustainability performance, and with this pilot we will be the first dairy company in Europe to gain valuable practical experience with Bovaer."

"Cutting methane emissions is the fastest way to combat global warming, as was underlined during the most recent UN Climate Change Conference in Glasgow.

"I'm proud that we, FrieslandCampina and DSM, can offer dairy farmers a solution that will help to make a major contribution toward tackling one of the greatest challenges of our time. Collaboration, new ways of thinking and pioneering innovations are crucial to making dairy farming more sustainable.

"It's important that dairy farmers are rewarded for their sustainability performance."

Bovaer is a feed additive for cows and other ruminants - researched and developed by DSM over 10 years.

The company claims just a quarter of a teaspoon of Bovaer added daily to each cow's feed will enable a consistent reduction in methane emissions of 30%, on average.

The company says the feed additive therefore contributes to a significant and immediate reduction in the environmental footprint of meat and dairy products.

Since the end of last year, Bovaer has been approved for use in Brazil and Chile, and, at the start of 2022, it also received EU approval.

One of the world's largest dairy co-operatives celebrated its 150th birthday this month.