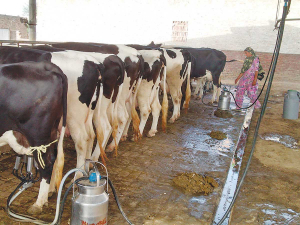 It has been awarded a $76,400 grant under the Agricultural Trade and Market Access Cooperation (ATMAC) program to build a long-term engagement plan with Indian dairy sector counterparts.

The ATMAC project will support long-term strategic engagement between the Australian and Indian dairy sectors to explore ways to improve collaboration and identify mutually beneficial opportunities.

The project is taking a long-term focus and aims to position Australian dairy farmers, processors and supply chains are preferred partners for their Indian counterparts into the future.

“Dairy Australia recognises the importance of long term partnerships in trade that include both government and industry support,” he says.

“The ATMAC project is timely to help focus Australian dairy businesses on possible areas for cooperation and relationships.

“Joint activities are supporting trade to India, with comprehensive research into the Indian dairy market to gain an understanding of India’s supply chain, state of the industry, key stakeholders and consumer behaviours.

“Australian industry participants are much better informed of Indian production systems and the market and the project will support a series of senior level meetings with key Indian dairy industry stakeholders,” Nation said.

India is the biggest producer of milk globally grossing slightly over 22% of total world production (twice that of the US), India has around 3.6 million dairy farmers milking around 300 million cows.

Most farms have only one to two cows with the odd larger farm pushing up the average.

Milk is mostly consumed by the farmer and his family. The national milk processing sector is small but growing.

In 2018, India produced 186 million tonnes of milk, which was 22% of that year's global total milk production of 843 million tonnes, according the UN's Food and Agriculture Organisation (FAO).

Milk output grew 5% over 2017 levels in India, while it was just around 1% in the European Union and the US.

The last five decades have seen the tide turning for India, which accounted for just 5% of the world's milk production in 1970. India is expected to produce 300 million tonnes of milk by 2022.

The Australian dairy industry will need 800 extra workers on farms by 2023.

Steady as she goes

As now widely reported, dairy markets are in a somewhat balanced phase.

Australian National milk production could drop as much as 5% next season, taking the national output to levels not seen since the drought.

Dairy Australia's next 'Situation and Outlook' report will be released on June 1, as a challenging season for many farmers approaches its end.