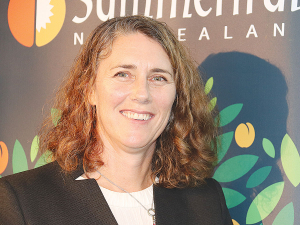 Summerfruit NZ chief executive Kate Hellstrom says growers are fatigued, worn down and in need of a really good break.

Summerfruit NZ chief executive Kate Hellstrom told Hort News the 2021/22 season has gone as well as could be expected - given the disruption and challenges to Covid.

She says growers are fatigued, worn down and in need of a really good break. This is due to the pressure they have been under, during this and previous seasons, to get their fruit picked, packed and shipped to market.

The critical labour shortage and threat of Omicron has made life difficult for growers.

"The severe labour shortage impacted everyone and that was really stressful and challenging for growers trying to recruit and retain enough people to get their fruit picked," Hellstrom explains.

"There was a lot of work done by growers leading into the season to promote themselves to seasonal workers and to provide the best opportunities to get the right workers in place to get their fruit picked. Although we didn't have a severe weather event like we had last year, it's been quite wet for some growers."

Hellstrom says Blenheim in particular had flooding in July and more rain in September which impacted their pollination, so they had an extremely low fruit yield.

She says, in general, the majority of the orchards got most of the fruit picked under the difficult circumstances. In some cases, yield was better than expected.

Hellstrom says 3.2 million tonnes of summerfruit were exported this season, well up on the 2.5 million tonnes the previous year. But she points out that 2021 was a very bad season. On the whole, prices were quite good and that helped offset the lower yields on some orchards.

She says one of the biggest challenges facing exporters is the cost of freight and disruptions to airfreight in particular. This saw much of the fruit grown in the South Island being flown out from Auckland, whereas pre-Covid most of this would go out of Christchurch.

"Freight rates have gone up tremendously and this will certainly have impacted on profitability," Hellstrom adds.

"Previously some summerfruit was exported by sea freight, but now it is no longer possible for us to get fruit at the right quality offshore in ships - so it now has to be air-freighted at a much higher cost."

Kate Hellstrom says the summerfruit sector has been working hard to attract New Zealanders to help pick the crop.

She says part of their campaign messaging is to point out that orchards are situated in very attractive parts of NZ where people like to go.

"We are also highlighting the 'experience' that people get when they come and pick the fruit," she told Hort News.

Hellstrom acknowledges that because summerfruit is picked early in the season it attracts university students and others who are looking for seasonal work. But missing from the current workforce is the large number of backpackers who were an integral part of the workforce pre-Covid.

In the past, she says there were upwards of 50,000 working holiday visa holders in the country and this is now down to less than 4,000. Hellstrom believes that, even when the borders open up again, these numbers won't reach the pre-Covid peak.

She says one positive has been getting more RSE workers into the country to help with the harvest. But Hellstrom says long term the industry needs to invest in more research, technology and management techniques that will reduce labour requirements.